SWEATSHIRT - THE FASHION PHENOMENON OF 20TH AND 21TH CENTURY

A brief history of the sweatshirt

The sweatshirt didn’t immediately storm the salons and it didn’t necessarily win the hearts of everyone, regardless age, sex or possession. It seems that its story didn’t start until the first half of the 20th century, but is the hoodie only 100 years old? Not! The sweatshirt is circa 3000 years old, and we will go back for a moment to the times when it was invented.

The first outer garments resembling today’s sweatshirt were worn by citizens of Ancient Greece and the Roman Empire, and long tunics with a hood, which can be considered a precursor of a sweatshirt, were also worn thousands of years ago by the nomadic tribes of the Middle East and the Maghreb - Bedouins and Tuareg, who, moreover, wear them until today under the name of djellabas or galabiya. Such clothing war and is comfortable, moreover, it protected against climatic conditions and it was possible to traverse endless roads in the deserts. It’s worth noting that the hoods were also in fond at medieval monks because they narrowed their field of vision and helped them to communicate more closely with God. The hood was also useful to virtuous women from the Middle Ages.

Clothing with a hood also has its darker side. Next to an axe and rope with a loop, the hoodie is an inherent attribute of the executioner. Hoods partially covering the face were worn as a sign of touring, an example of which can be e.g. the hood court in the Commonwealth gathering during the interregnum. What character do you visualize under the slogan „inquisitor”? Of course, the figure of a Dominican in a hooded habit@ And the members of a Ku-Klux-Klan? They covered their faces ti hide their identity. There’s a reason why the medieval allegory of Death is a skeleton white face is hidden in the folds of the hood. For the hood is also a mystery, something dark, dangerous and unknown. Clothes with a hood - such as a coat, cape, jacket or caftan - are especially liked by the creators of horror films. We will leave the scenes with characters with. Faces hidden under the hood to your imagination!!!

But let’s go back to more recent times - to the 20th century. Today’s sweatshirt is mostly made of jersey, a mixture of cotton (80%) and polyester (20%). Sometimes it has strings, sometimes it has a hood and pockets, sometimes it’s very straight and looks like a slightly thicker long sleeve blouse. 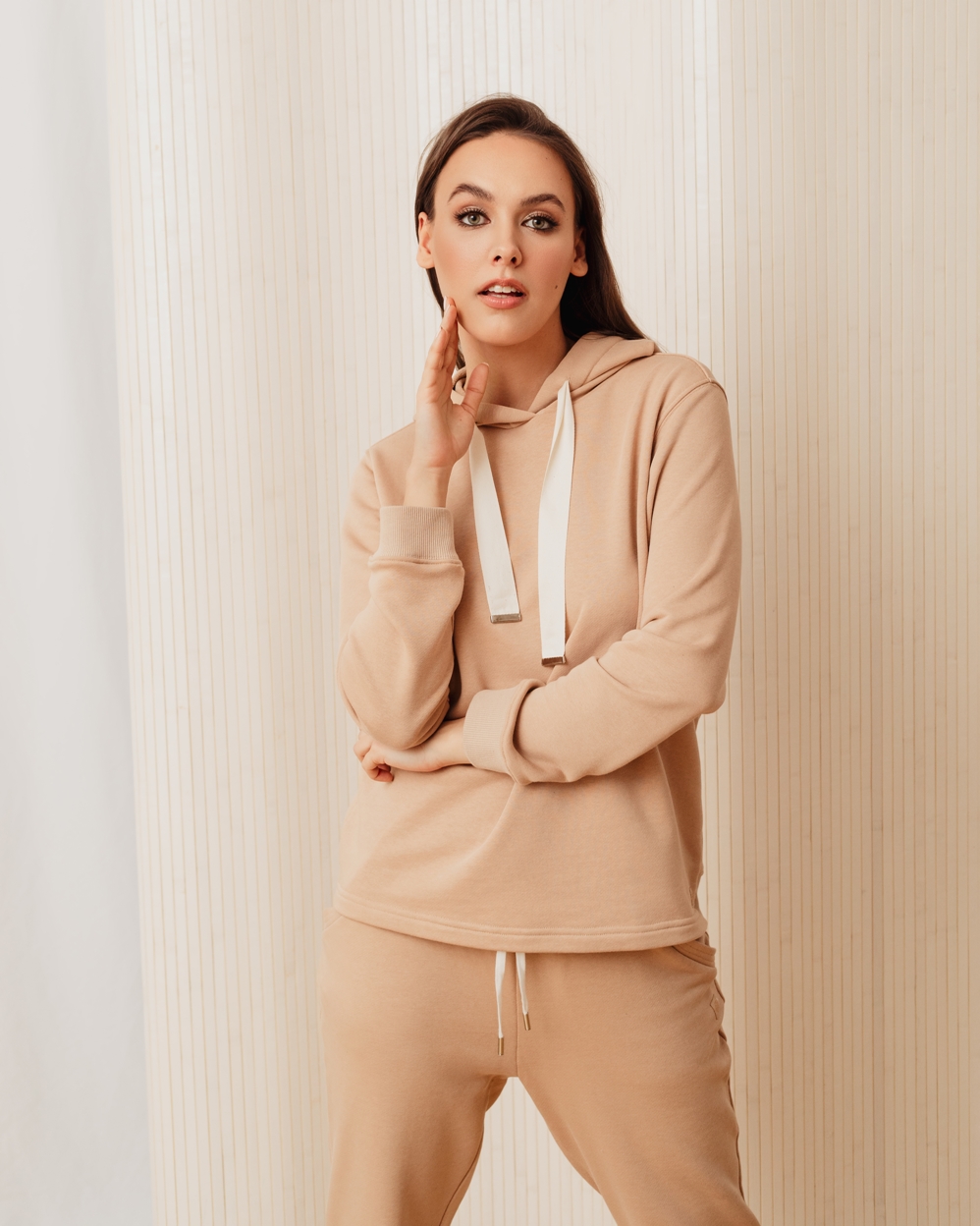 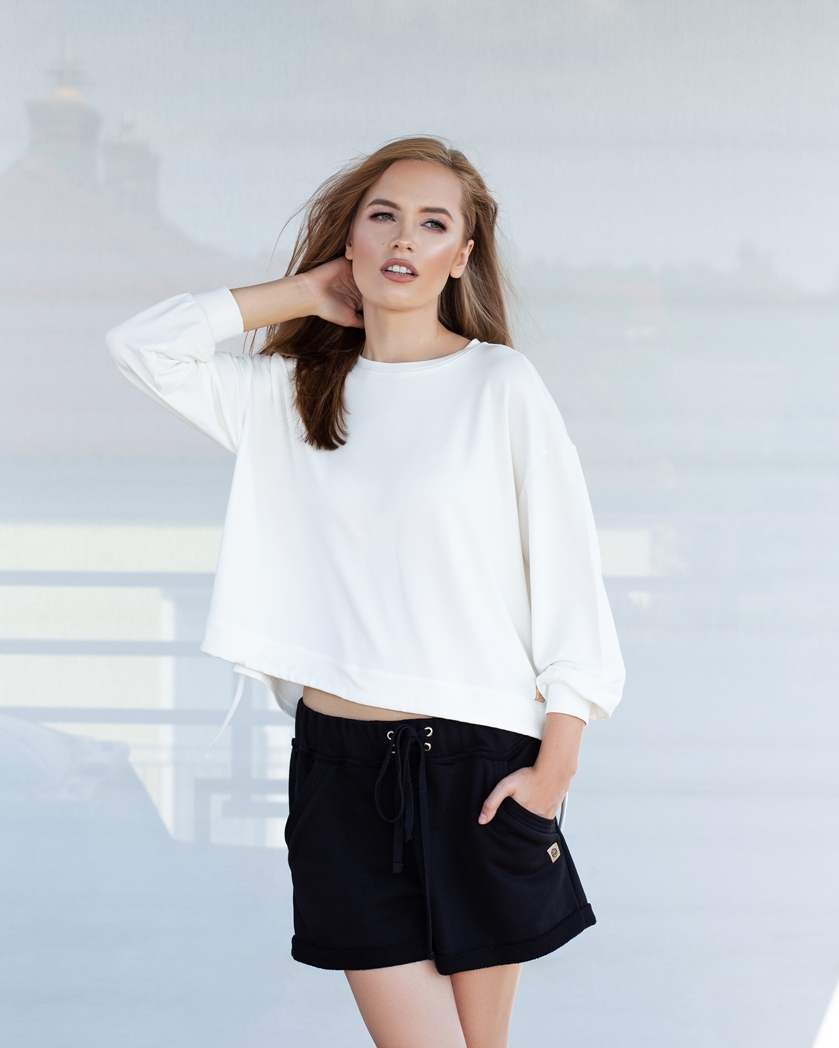 The modern version of the sweathirt was first introduced to the world around 1930 by the Knickerbocker Knitting Company (today’s Champion). It was to be intended for athletes to keep them warm between training sessions. However, the hoodie was quickly taken over by workers, students, and soon after that, the hip-hop culture of the 70’s. And then the rest of the population, even in the furthest corners of the globe. It was quickly realized that the sweatshirt, which comes in various forms, isn’t only warm and comfortable, but also extremely stylish.

Today, sweatshirts are worn by everyone, even the greatest of this world, such as Mark Zuckenberg, and psychologists give the sweatshirt a lot of merit, because its cut and fabric evoke a sense of peace and security. Which of us, after returning from work after a hard day, didn’t feel a bit better after changing office clothes to a comfortable sweatshirt and sweatpants or leggings?

When it comes to the fashion aspect, the sweatshirt was actually only a typical sports style with sweatpants, shorts, leggings and necessarily sneakers. Then it was also worn with jeans.

In the last decade, a sweatshirt has also started to be a luxury, eclectic product, and often even a limited product. Sweatshirts with a hood, popularly known as hoodies, have the most prestigious designers and clothing brands in their portfolio. 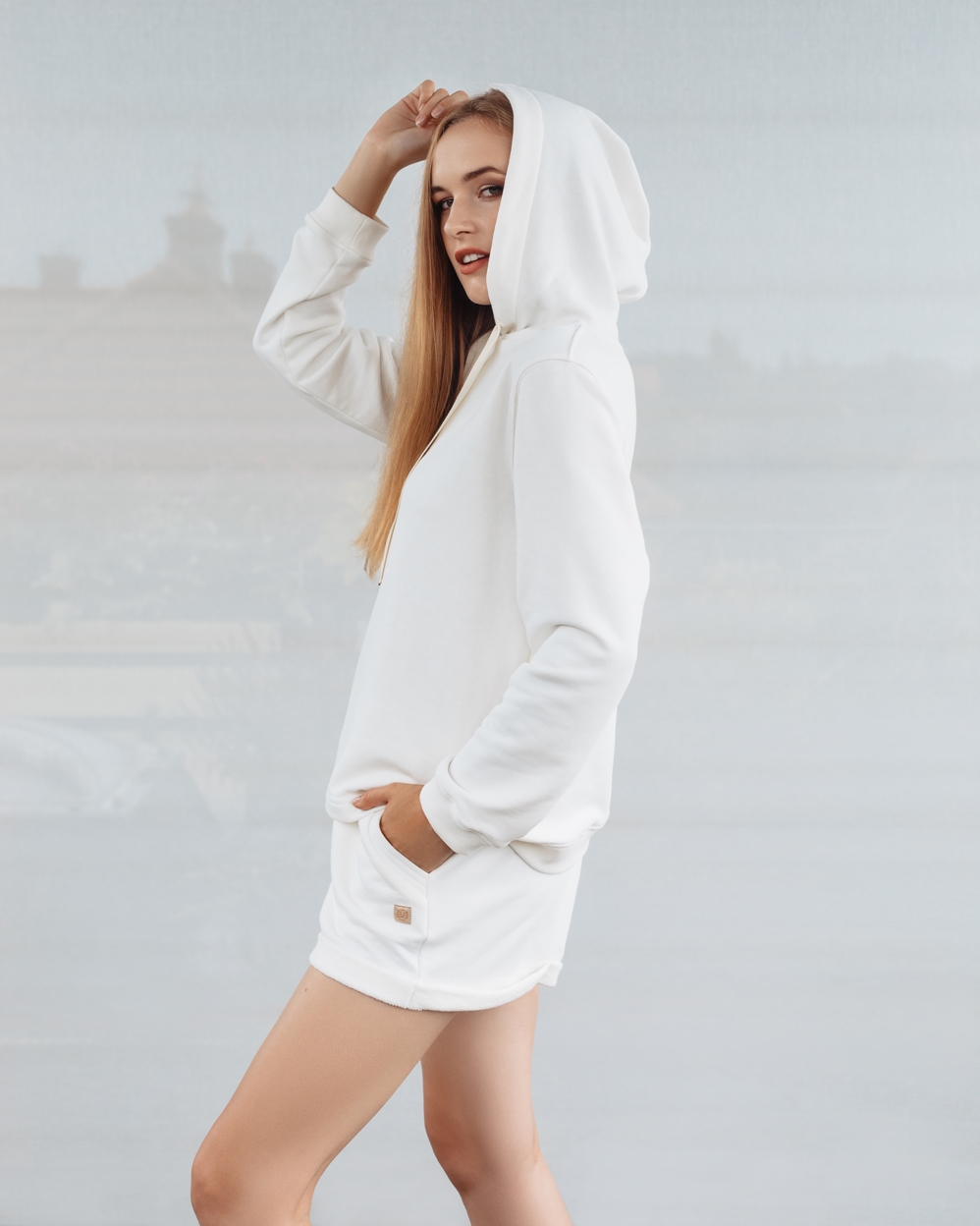 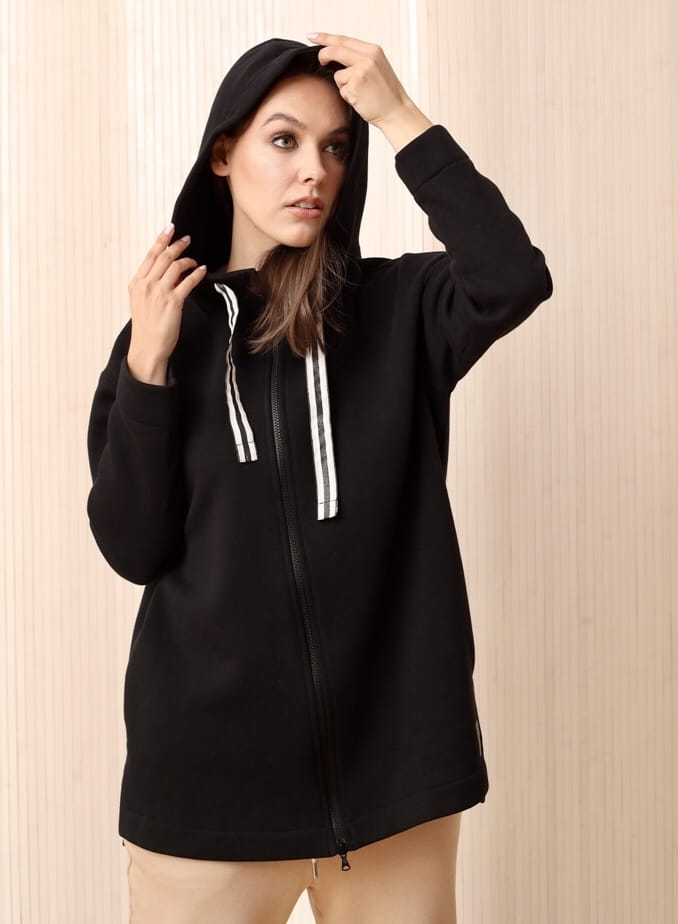 What to combine a sweatshirt with?

With anything you want! Don’t you believe? Try wearing a plain pink or black sweatshirt, such as our Sidney, with a sequin hem and pair with high heels or sandals. It will be the perfect set for a weekend party.

If you want to keep a minimalist style, we recommend a black hoodie, for example our Oslo model, combined with our signature Charlotte skirt in caramel color and sneakers. The Oslo sweatshirt also looks perfect in the company of leather pencil skirts or with waxed trousers. Complete the whole look with high heels and a small handbag; while jewelry should be kept in the atmosphere of the 80’s (gold and exaggerated forms). 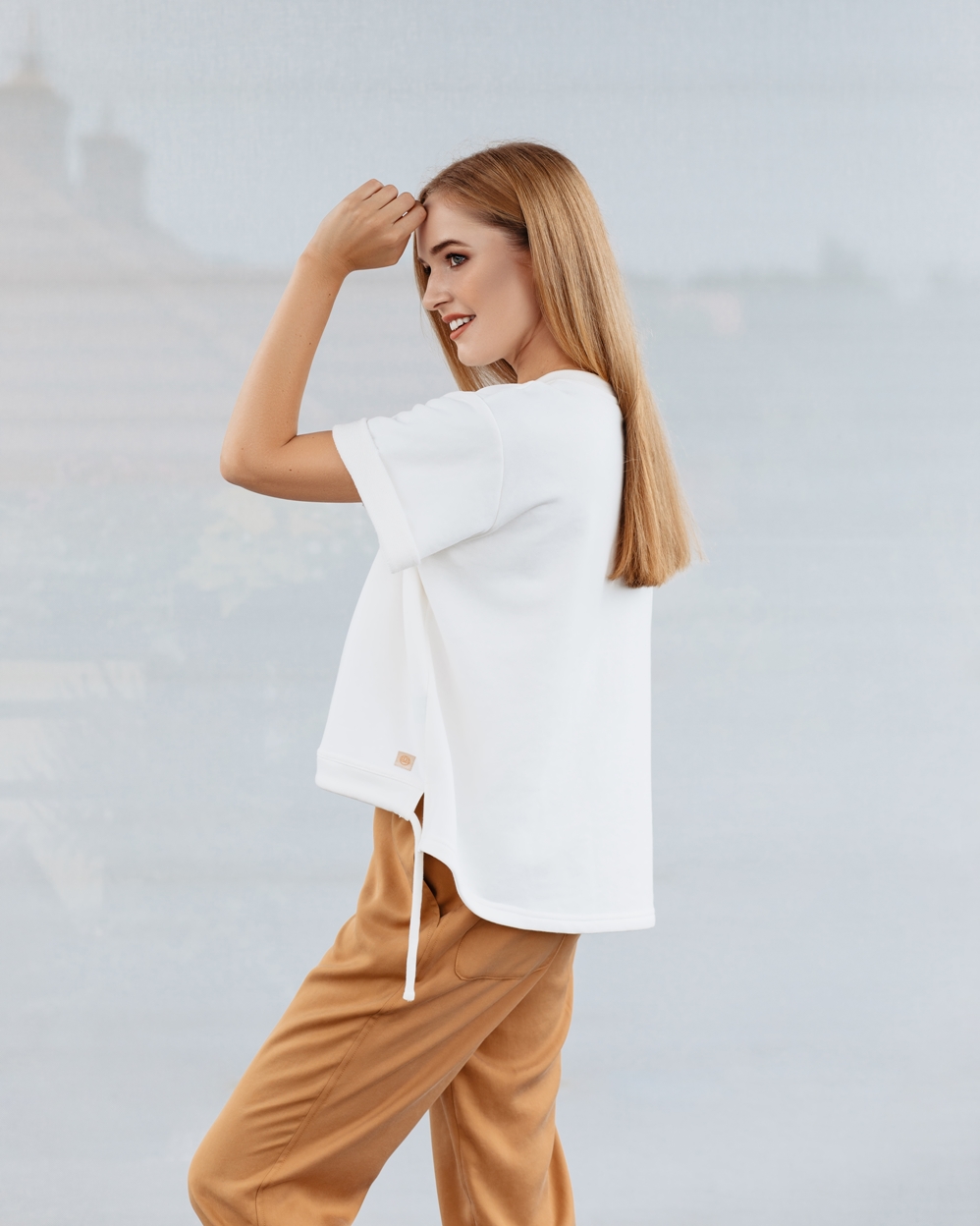 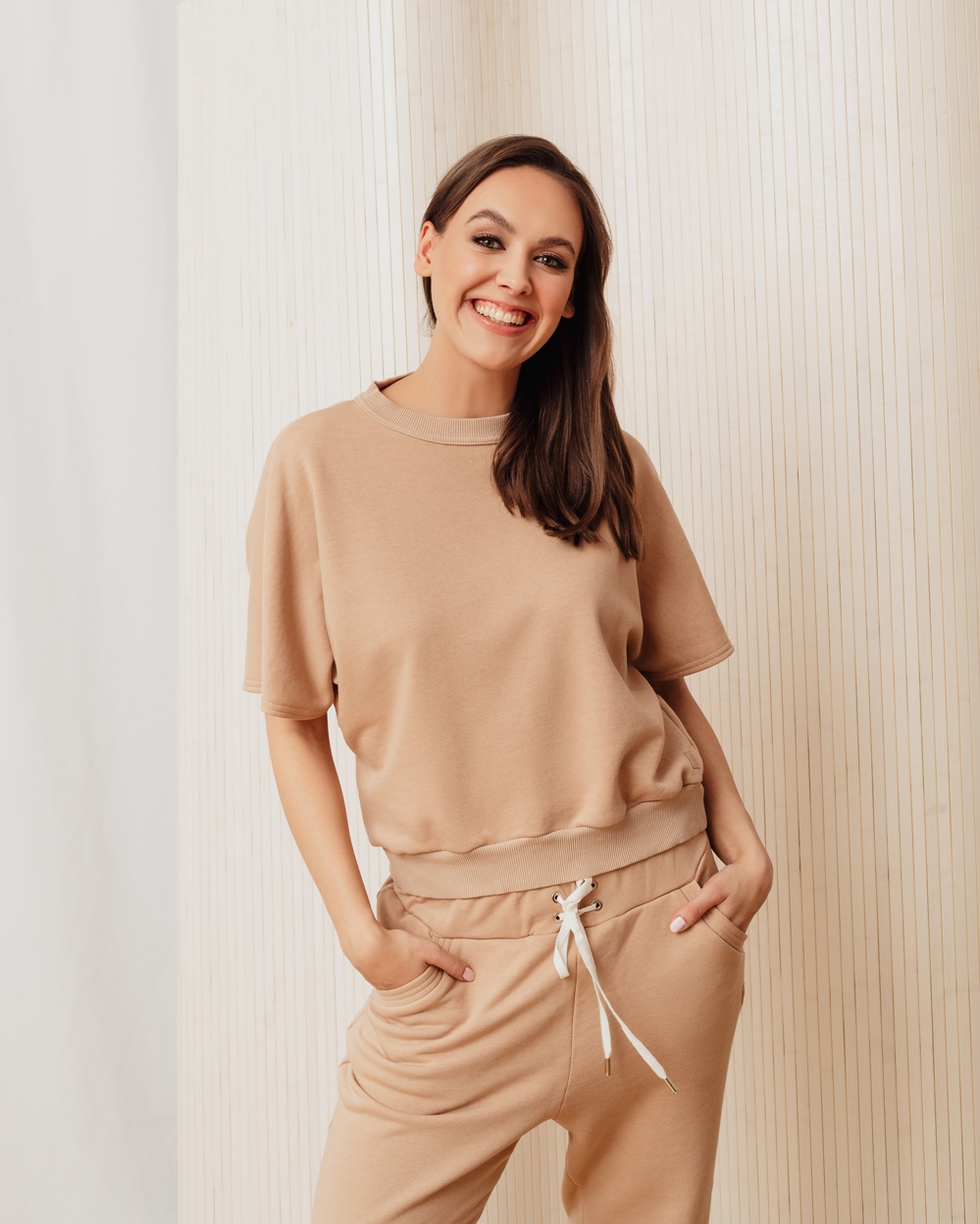 If you want to wear a sweatshirt every day, don’t hesitate to combine it with chino pants. For example, the O!Glamour Tokyo and Miami sweatshirts are a perfect match for the Orlando pants from our Tencel® collection. Choose the shoes you like best for your feet. Both high heels and sport shoes will fit perfectly. In this style, jewelry and accessories can be much more minimalist.

If you love to experiment, we recommend combining O!Glamour sweatshirts with sweatpants and high heels. Be sure to try our Bergen model - the perfect sweatpants!

How would you style your sweatshirt? We are waiting for your photos in our products!

up
Shop is in view mode
View full version of the site
Sklep internetowy Shoper.pl